Design Advocate
One of my goals, since being asked to join the Design Team back when Sonn was an Advocate was to introduce Anakin Skywalker to the game.  I’m proud to say that at long last, the Chosen One has arrived!

Initially, my plans were to introduce him without ANY new rule additions.  I was not an Advocate, and I realized I couldn’t count on Sonn to push for changes.  So my idea was to have a DS objective that gave him to the LS.  DS would do stuff, like drain and/or battle Anakin and after a certain # of times they would flip, and Anakin would turn.  So the objective would restrict Vader etc naturally.

Fast forward a few years.  I’m all that’s left of that Design Team incarnation.  Block 8 was going to be Aliens, Block 9 prequels, and Block 10 all about the Skywalkers.  I was still not an Advocate due to me rejecting the offer a time or two, but I knew I could do it.  I was planning on the Anakin objective to be in 9 or 10.

Aaron, who for better or worse helped come up with a lot of the idea we are still using in block 9, wanted to build up to Anakin’s conversion.  So maybe in 9.1 we have Ep2 Anakin.  9.2 would be Clone Wars Anakin, and 9.3 would have Ep3 Anakin and conversion.  Our initial idea was to restrict him to the block 9 “framework” objective that some of you have already seen.  But early in development the development team wanted to see if we could make him playable in all LS decks, to give LS a new main but also to let more people play with him.  The rest of the Advocates were fine with trying that out.

Early in testing Anakin was a Clone Army character type, as were many of the other cards.  The testers all pretty unanimously asked us to just make him Republic, as he didn’t have a lot of support cards as a CA guy.  That was a catalyst to make Clone Army/Separatist into unloaded icons rather than new character types, and I think the playtesters made the right suggestion.

We seemed to hit a sweet spot with him early on (more on that below).  The biggest changes with him revolved around him in his matching starship.  Everyone seemed to be very positive about his text both thematically and game play wise.  Onto the card!

So first thing you will notice is that he is a Padawan.  I think we now have 4 Padawans out there… Ani here, Jaina, Anakin Solo, and Obi Padawan.  So we have the seeds for some sort of Padawan helper/deck down the road which is fun.

His lore is blank.  He will likely become a leader (of clones) later in the block.  Right now he’s just a brash and cocky Padawan.

Early on he had some standard text that we envisioned being on all Anakins.  (Lost if your [V9] objective not on table.  If about to be crossed, he is lost) but after talking with rules since we are making some changes to how the Anakin/Vader personas work, they felt that a rules based solution was cleaner.

This is definitely meant to be the piloting version of Anakin, but versatile enough to do well on the ground as well.  I’m not sure if all other Anakins will deploy cheaper aboard his ship (or maybe we will make new ones).  PTing feedback was that his combo was too expensive for what it did, so over time him and the ship got a little cheaper to match up.

The maneuver line was on there from day 1.  Best starpilot in the galaxy and all that.

The PTers suggested the initiate battles for free line.  He’s reckless, and he is going to charge into battle.  Of course, that opens himself up for some painful lessons at the hand of the Dark Side player.  It’s my favorite line on him now, I think.

BD +1, as a throwback to Math (Premiere) Vader was on there from the beginning as well.  It’s good text that got overshadowed by other stronger text on other Vaders, so it’s good to see it back in the game.

The biggest change from Aaron’s version to what went to development was the next line.  Originally, he said “During battle, your destiny draws are +1 (and your total power is +3 while defending)”.  I pushed to break that apart into BD+1 and giving JUST Anakin stronger weapon destiny draws, since his saber is somewhat vanilla nowadays.  I did not think giving LS another Yoda GW would be good for the game, especially once we wanted to make him playable outside the V9 objectives.  There are lots of interrupts that would be affected by a global +1 and I didn’t want to try and test all that.  And finally, if he is with friends I could see conceptually inspiring them to fight better, but in game terms him and Mace should not able to swing sabers 3 times all at +2 to total.

I hope you will enjoy playing with him and enjoyed this peek into his development history.  Enjoy 9.1!

Rules Advocate
There will be two new entries in the AR in order to facilitate Anakin’s entry into our game. The first entry covers all the rules about Vader and Anakin being separate personas, and a player choosing one to be lost if they cross their opponent’s Vader/Anakin over. There is also a section detailing that Anakin and Anakin Solo are separate personas and how they will be referred to. The second entry is an errata to Twilight Is Upon Me to only pull [DSII] Anakin Skywalker to prevent character versions from being pulled with it.

The following is an addition to Appendix D – Identifying Cards in the AR:

The following is an addition to Appendix A – Errata in the AR (new text is underlined):

Twilight Is Upon Me
Deploy on table. Once per turn, may take one The Force Is Strong With This One or [Death Star II set icon] Anakin Skywalker into hand from Reserve Deck, reshuffle. May use 2 Force to cancel You Are Beaten (unless canceling Uncontrollable Fury) or Dark Jedi Presence. (Immune to Alter.) 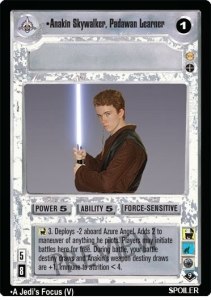 [/one_third]This set is going to be our most ambitious set yet in terms of the number of images were going to be putting into the set. But as a bit of a preview, here is the unfinished Anakin Skywalker card that will be using for 9.1! The image is not finished but it is the image we will be using in the final version. Our cosplayer Dan Glitch (http://danglitch.com/) has been gracious enough to let us use his work for our cards and I think that the likeness is very close.