Since we released the Set 7 spoiler, there has been lots of discussion on set size, frequency, and content. I have been reading all of these posts, and while I was unable to respond to everything in those threads, I aim to do that in this space.

One thing I personally have been saying since I became Design Advocate just less than a year ago is that players should have some patience with our progress with set releases. I truly believe we are one set away from realizing this, and I’ll explain how we got here, and what else we still have to do to meet that.

Shortly after I became an advocate, we decided to change our Design & Development process to an “agile” system in order to give us more flexibility and become more efficient with how we design/develop/playtesting/proof sets. At that time, around the release of Set 5, we had a very rough idea for upcoming sets: we knew Set 5 would be primarily player cards, but Set 6 was still in flux. Rogue One was coming out, and we wanted at least to feature some characters from that movie. We were still working out the major kinks in the new process, but things were coming together a little more. We went through some turnover on design and development, and started to build up some designs. While Set 6 was smaller than we anticipated, we wanted to release what we had ready (one of the benefits of agile) as opposed to delaying everything to try to work on the problem cards.

By the time we got new blood in the design team, Set 7 testing was underway (side note: agile let us start testing a major dark side objective right away after Set 6 was released, something we hadn’t been prepared enough to do before then). Set 7 was supposed to feature a dark side First Order objective and much of what actually made the cut. However, the objective had its own issues to be worked out, and D&D made the decision to not potentially disrupt the World Championship and European Championship with an objective that was forced out too quickly. We decided the best (safest) course of action was to release Set 7 as you know it.

This brings us to today. Hopefully that background makes sense as to why it’s been a bit slower than most of us anticipated. While I have been preaching patience, I believe Set 8 is the set where we turn the corner. In fact, #set8isgreat has been known to be trending in some circles…

Set 8 testing resumed almost as soon as Set 7 was officially released. In addition to the aforementioned First Order objective, we also have a light side Rogue One/Yavin 4 theme ready for more testing that will be very familiar to legacy players. While playtesting works on those, development will be refining even more objectives and 2-3 card mini themes for existing platforms. Add in more player cards and some one offs from design, and Set 8 could provide something for everybody.

Before you think we may be going from too slow to too fast in one set, I should point out that I don’t anticipate releasing ALL of these cards and themes. However, all of the patience and hard work behind the scenes pays off here, where we have many options as to what makes the cut. Then, after Set 8, the leftovers that have a good skeleton can be improved for a future set. By that time, The Last Jedi will be released and we’ll be incorporating that into the game as well.

Another word of caution – this doesn’t mean every set from now on will be a big set. We constantly evaluate the meta and the pulse of the players to determine what is needed at a given point of time. Sometimes it’s a 10 card set to tweak things, other times it is 40 cards to shake things up. Until now, we have only had the option to confidently do the former.

I also read many comments about how we no longer have large Decipher-esque sets centered around one overarching theme. I can’t tell you how much I’d love to have released a Jakku expansion with every alien, creature, and location from the planet, with dueling objectives for each side. However, that is unfortunately a thing of the past for a few reasons. The obvious reason is our limited resources combined with card pool bloat. That combination means errata become much more likely, and the game gets out of hand much quicker (this seems like a good time to plug our need for more playtesters, of all skill levels! Time and enthusiasm from testers are our most valuable resources). Another reason we can’t do these sets is because we have too much material happening too quickly to keep up with it. As Star Wars fans there hasn’t been a better time to be alive, but as makers of this great game it’s a huge burden. We don’t have objectives from Attack Of The Clones and Revenge Of The Sith (but we do have them ready for development to see!), or from many aspects of the TV shows. We are still finishing up The Force Awakens and Rogue One. And now The Last Jedi and the Han Solo movie are right around the corner. So we certainly have our hands full with material, and are doing our best to fill the game from each media. Finally, one aspect that I believe many overlook is that this is the first time in the history of this game that we are trying to release cards for a movie as soon as the movie is released. Decipher had the luxury of 18 years digesting the original Star Wars before releasing this game. Even when a new movie was released (The Phantom Menace), Decipher took almost 2 years to release cards from that movie. We also don’t have inside access to Lucasfilm to learn the ins and outs of the new canon either. We absorb as much material as we can, and do our best to interpret it using the tools we have (hence why Lor San Tekka is ability 4 even though it is now clear he is not Force sensitive). As you can surmise, what we are trying to do now is incredibly ambitious, but I love it and wouldn’t have it any other way. 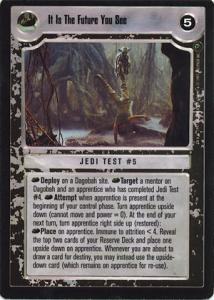 I truly hope this long-winded post has been insightful to you all. If it hasn’t, then here’s some insight into the current plan for future set schedule and size.

*the above is obviously subject to change for many reasons, but as of right now, you know what we know as far as what the future plan is

I hope you have enjoyed my rambling. Keep the discussion going – I read almost everything that is said on the forums and am doing my best to answer your questions and make the best game possible for each and every one of you. If I haven’t answered something, feel free to reach out to me directly and ask!