I don’t know about you guys, but when I watch Star Wars movies (especially newly released ones), I am constantly watching for material for SWCCG. I always purchase Pablo Hidalgo’s visual guides to find out about new characters and starships. I try to learn their names and back story, and think of ways to translate that to this game. In fact, during my 3rd viewing of Rogue One, I found myself barely paying attention to the main characters on screen, and almost ignoring the plot, as I scoured the background for Easter eggs or characters I recognized from the book. 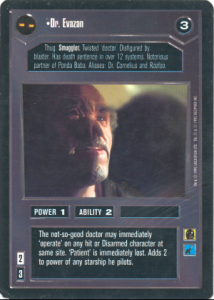 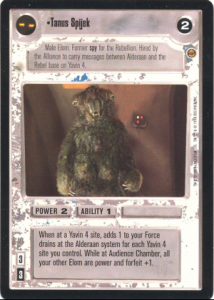 I look back at the set releases from Decipher in this game, and I am in awe at the (formerly) canon material that was introduced through this game. The aliens in the Mos Eisley cantina, the Rebel officers on Hoth (everybody knows their names, or at least Major Bren Derlin’s), the residents of Cloud City, and the scum in Jabba’s Palace all added so much to the game, even if the cards never make the cut into your 60 card deck. It was fun just to open new packs and see what was being added to the Star Wars Universe.

We can’t quite do the same thing now, but it doesn’t stop me from dreaming. When I became Design Advocate, one of the first things I asked of the Design Team was to build our “design library,” so we had a large pool of cards to choose from no matter what era we were looking at, and so we would have an idea of what our future plans were for every corner of the galaxy. In my ideal world, I wanted the library to look like the master list for a new (Decipher era) expansion. Put in every nook and cranny, every device, witty interrupt names, the vehicles, etc. I wanted it all, even though releasing three virtual sets of 180 cards for every movie was never something we hoped to do. The idea is simply to give ourselves the depth that Decipher had to work with (only we can’t be as creative as Decipher was).

For Rogue One, I designed a group of about 50 cards right off the bat. It included such minor things like the Death Star Scientists who were killed on Eadu, Pendra, the girl Jyn saves in Jedha City, Nik Hepho, a bounty hunter working with the ISB on Jedha, a virtual Blue Milk, and a new Red Leader. It is so exciting to me to get the chance to design all of these, even though I know many will never see the light of day, simply because we can’t conceivably develop, test, and release hundreds of cards in a year anymore.
When I am designing large groups of cards, I consider what kind of theme or cohesiveness I want them to have, if any. I personally like cards to have synergy, so you are encouraged to use them with each other for greater effect. You see that with the Star Wars: Rebels characters in the game so far (Kanan and Hera). They represent the teams that worked together to fight the Empire, so they get synergy from being with other rebels (or an Imperial).

With Rogue One, the design team wanted to represent the characters sacrifices. All of the heroes in Rogue One sacrificed themselves to help in the fight against the Galactic Empire. With that in mind, we gave them all what you Hearthstone players would call a “death rattle” – the ability to do something as the character leaves the table. Hopefully, players use these abilities in creative, thematic ways to plan their attack against the evil Empire.

Regarding Set 6, it will be small. It shouldn’t contain more than 10 or 15 cards, of which none will be new objectives or major additions to themes, because we’re aware that many players don’t want very large shakeups to the meta at this time. We are still on target for an early April release date. And since April is just a few days away, it’s about time to share a spoiler with you. While not a new theme, I expect this card to have the biggest impact on the meta of any card in the set.

•What Chance Do We Have? [Imperial Atrocity (V)] 5
[Special Edition – R]
Lore: Blank.
EFFECT
Deploy on table. Whenever you lose Force (except from a Force drain or your card) during opponent’s control phase, unless opponent occupies more battlegrounds than you, may reduce loss (to a minimum of 1) by the number of battlegrounds you occupy. [Immune to Alter.]
[Set 6]

The main design purpose of this card is to try to keep TTO under control. The player survey showed that many of you were not a fan of this deck — 42 out of 116 people called it their least favorite deck, by far the most of any deck (although 22 also called it their favorite deck) — probably because of the consistency with which it could deal 3 damage just from occupying one system. We’re hoping this card will cause players on both sides to adapt to a strategy of spreading to more battlegrounds, a philosophy consistent with many other cards we’ve made the past few years.

While at first glance this card appears to hurt all direct damage for dark side, in our playtesting we have usually seen that a deck like Imperial Entanglements is only modestly affected, as it naturally spreads to 4 or 5 battlegrounds already. We also worded it in such a way that it wouldn’t limit our future design plans with blowing away locations to cause large damage, such as with Target The Main Generator or Commence Primary Ignition. 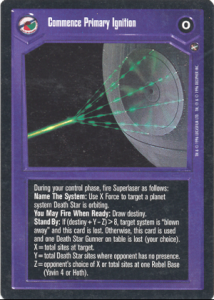 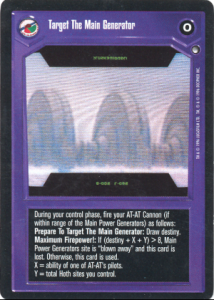 If you keep your eyes open on the forums and your other favorite SWCCG websites, you might be able to find a few more spoilers!