In this modern day and age, you can actually play instantly (and completely free) online against other opponents without ever having to purchase any cards.  There are several programs available for this, the two most popular of which are Holotable and GEMP.

The main differences between the two is that Holotable essentially gives players a “virtual table top” to play against one another and simulates real life game play via the internet, whereas GEMP provides automatic rules and modifier enforcement, so that much of the gameplay and calculations are automatically enforced.

Holotable is a program you download onto your computer, allowing you to play the game for free against another player over the internet.  The program essentially simulates a virtual tabletop and once you load your decks onto it, you can drag and manipulate your cards exactly as you would be able to in real life. In other words, if you wanted to move your Boba Fett card from one location to another, you would (just as in real life) have to drag him from one location to the other. Because it is essentially a virtual table top, all of the rule enforcement (and remembering the effects and interactions of the cards) falls upon the players. 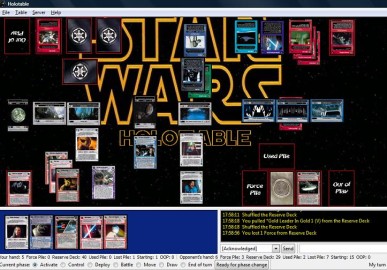 A screenshot of a Star Wars CCG game played on the Holotable program.

Along with holotable is Holodeck, which is a computer program with every single Star Wars CCG card loaded into it. You use that program to build your deck to load onto Holotable, however Holodeck doubles as a very good resource to help you search cards by attribute, expansion release, lore, game text and more. Even those who do not play Star Wars CCG online find Holodeck useful as a way to help them find particular cards and build decks in real life.

More detailed instructions on how to use Holotable can be found here.

GEMP is a way to play Star Wars CCG online for free with automatic rule enforcement. In other words, you do not have to remember that the opponent’s effect is making your Darth Vader have less power, because the program calculates it for you. You simply decide what action you would like to do and the computer program does it for you. This can be a bit easier for newer players as the program itself remembers and enforces actions you may not remember. However, due to the complexity in the coding, the card pool available within this program (currently) does not include all of the cards available to players in real life.

A game of Star Wars CCG being played on GEMP.

The GEMP program is run off of this website.

An introductory post and instructions made by its creator can be found here.

An introductory video explanation and demonstration is here.

An article about playing on GEMP can be found here.

Discussion and questions (as well as some more information) about these programs can be had on this message board.